Another way, that almost seems appropriate for the Devterm would be to go oldschool and attach a uuencoded version.

I haven’t used that for ages, since I last grabbed something from UseNet, but it’s an ols solution for the same problem!

uuencoding is a form of binary-to-text encoding that originated in the Unix programs uuencode and uudecode written by Mary Ann Horton at UC Berkeley in 1980, for encoding binary data for transmission in email systems. The name "uuencoding" is derived from "Unix-to-Unix encoding", i.e. the idea of using a safe encoding to transfer Unix files from one Unix system to another Unix system but without guarantee that the intervening links would all be Unix systems. Since an email message might be forwa...

won‘t work since only pictures are allowed here…

The point of uuencoding is that the output is standard ASCII text - so you could paste it as a message, not an attachment.

But don’t do that, 'cos 51kB of gibberish would be very annoying to scroll through. Uploading it to a third-party host works fine - I just downloaded the STL from the Prusa website. Thanks!

Yeah, I was only joking about uuencode. It solved the problem but for a different era. Thankfully we don’t have to see that gibberish anymore!

And thanks, @stefan for uploading that STL file to Prusa!

So far my devterm rarely gets hot enough to run the fan at all. I haven’t tried anything very demanding on it yet though. I printed the shroud just for fun really.

This entire thread is amazing! I’m sure my A06 will need some modification when I get it, especially since I plan on using it for a cross country road trip this summer.

@stefan would you be up for creating either a Thingiverse or MyMiniFactory account and posting your work there?

I don‘t know MyMiniFactory.
Thingiverse I know and liked it in the past… nowadays there seem to be too many problems so I did not post there:

Does Prusa not work for you? As far as I know you don‘t need a Prusa printer to download there?
And them beeing a manufacturer of 3d printers, thingiverse belongs to Makerbot, also manufacturer.

Oh wow, I wasn’t aware at all about the thingiverse data breach.

Does Prusa not work for you?

I greatly appreciate what you’ve shared, no biggie on only having it on Prusa’s site

I just don‘t like having my data strewn over a lot of sites… I need a reason to open an account. I used GPL as licence, so feel free to post it elsewhere

Especially with this little design there is no artistic worth or anything, just a quick and dirty hack, not even worth a licence in my eyes

Have printed a new back cover, I think it will be easier to remove a part of it and print a clip on to that than designing a new cover…

I had wrote a simple daemon to throttle the big cores when the temperature hits 60°C, but now under sustained load it does not even go over 54°C…

I’m just using the flexible metal heatsink that sticks to the case and comes included.

There are two small rectangles of solid heatsink putty and this thin flexible metal sheet with copper on one side and a dull silver on the other. The sheet had an adhesive and was covered with plastic, but mine was ajar and there was no sticky. I just super-glued it to the case (it sticks to the case, not the cpu), added both rectangles to the cpu, and slid the carrier into place. It fits nearly perfectly, making contact between the cpu and the copper on the case with a barely noticeable bulge.

The new wave of Devterms seems to include a heatsink that the first wave didn’t come with! The thin metal (graphene?) heatsink that sticks to the case is new. It seems to work well!

Is this heatsink different than the one that had adhesive and sticks to the CPU? Picture definitely looks different. Here’s hoping there will be a way for those of us who bought one earlier to get one…

Same. There are two small rectangles of solid heatsink putty and this thin flexible metal sheet with copper on one side and a dull silver on the other. The sheet had an adhesive and was covered with plastic, but mine was ajar and there was no sticky. I just super-glued it to the case (it sticks to the case, not the cpu), added both rectangles to the cpu, and slid the carrier into place. It fits nearly perfectly, making contact between the cpu and the copper on the case with a barely noticeable bulge.

Mine’s different. It is a single metal piece, with ridges, and adhesive. No separate rectangles of heatsink putty. No copper (unless it’s painted, as the metal piece is black). Now I’m wondering if I installed mine incorrectly, since I stuck it to the CPU. I’m not sure it would have come in contact with the CPU if it had been stuck to the case, plus the ridges would have been touching the CPU.

Pretty sure there was a picture posted to another thread, as several people wondered what it was. It was not mentioned in the instructions, and it sounded like some owners never installed it. I did, since it sounded like the theory that the adhesive was thermal tape seemed valid, and I guess it does help with cooling a little bit.

I never run with all 6 cores because it would get too hot though. I tried that once and I didn’t like where the temperature was going. Mine is routinely around 60C with just the 4 cores set to 1k each. Occasionally I’ll turn on just the two faster cores, but I turn off the other 4 when I do. That ends up producing about the same heat, usually.

I’d like to get one of those fan shrouds too, to help with airflow. I don’t own a 3D printer though, and I haven’t bothered buying it online through a service. The keyboard/case cover is cool too, but the fan shroud seems like it would be really useful.

Here’s a picture (someone else posted) of the heatsink mine came with (installed). There are other pictures in that same thread, showing the reverse side before it was applied.

Here is the heat sink as I applied it: [heat-sync-applied]

Here’s a really boring video of me performing common tasks on the A06. The interesting part is on the bottom right showing CPU info and temps. 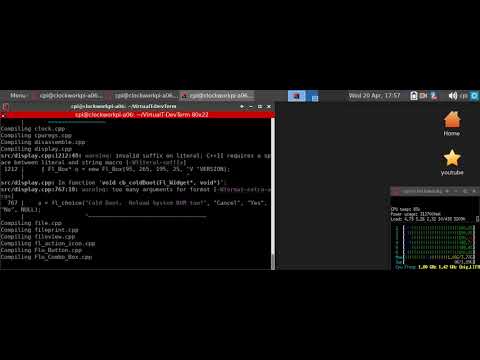 I also have the data log with graphs here: devterm-stats - Google Sheets