Any news about Gameshell getting back in stock?

FYI we have a couple new-in-box game shells which are leftover prize winnings from game jam #1. I believe we have a yellow and a white. Will sell to someone in the US lower 48 (sorry international people, dont want to deal with the paperwork to ship them outside). $140, shipping included.

Yeah, unfortunately, I’m in Romania. Amazon listings for the GS don’t get shipped to Romania either… But thanks for offering.

Does anyone have updates on when we should expect these to be back in stock? I’m assuming they’ll be back for the holidays but hoping to narrow down a time window! Thanks.

We are already back on official website now, and will be back soon on amazon.com.

The official store is sold out and on amazon. I have been watching an before november 19 so when when will it actually be back in stock? I really need one soon.

I have been watching an before november 19

A lot of things have happened in the world since November 2019 that would disrupt the distribution and production of the gameshell. I don’t think the previous post referencing a restock would still be valid, almost a year later.

I remember Yong making a post in September saying it would be 2 months from then. So mid November.

Gameshell out of stock GameShell

Thanks for your support! Sorry for keeping you waiting. ETA 2 month. We are working on it.

There were a few classified posts from people selling theirs in that thread too.

I’m not sure if asking for it harder and more insistently as an individual would make it get produced any faster, but I could be wrong.

@yong is one of the creators of the admins/mods/creators Gameshell, so I’d say that what he said was an official announcement. I think @vanessa was a team member who was dealing with PR etc, so perhaps she could chime in with any information.

If you need if by the 14th, and the EARLIEST It may come back into stock is the 15th, I wouldn’t hold your breath. Postage alone will be around a month, given which country it will be coming from.

Suppliers of parts would be going through hell. Postal services are going through all sorts of quarantining and screening processes. This really isn’t a good time to be pressing for precise time frames.

Meantime, possibly consider replying to @dessysGS. He also replied to you in the previous thread you posted in. You will be more likely to get it in time from him.

I would but I live in Canada and I really don’t want to get something that has been used by another person because, well you know. That’s why I have not bought one off of e-bay. But thank you so much @dessysGS for the offer.

Thank you very much for your interest! I’m really sorry to disappoint you, but if you need it by the 14th of November, I’m afraid we could not guarantee that. If you want it badly, please PM me to see if something can be worked out.

It’s ok @yong. I mostly wanted to play N64 and Dreamcast and I found a new console. It runs on a raspberry pi 4 so emulation is perfect. I can also play Gamecube/Wii games. But I will definently still get a Gameshell when it’s in-stock.

N64 emulation is far from perfect on any SoC; let alone a desktop computer.
Dreamcast you’ll definitely have a lot more luck with.
However, keep in mind that the pi4 has a much higher power requirement, and even in a proper “desktop” replacement case, overheats like crazy, without an adequate HSF setup. Your battery life will be shocking.

Just letting you know, before you go ahead and actually order another device.

Last I was fiddling with my pi4, running GameCube/Wii required you to be running in a full Debian desktop environment, and using a 64bit distribution. This was with Dolphin. It was all an extremely manual process. Just be very prepared to have to troubleshoot a lot. I was using the first Gen 4GB rpi4, and recently also the 8GB upgraded variant. Both versions could “run” GameCube and Wii, but was far from being perfect.

Thanks a lot. It has a very big fan and a 4500 milliamp hour battery. I have dolphin emulator on my chromebook so I can use steam link on retropie. I am also guaranteed that I can play minecraft.

I am also guaranteed that I can play minecraft.

Unless you’re planning on using a retail $35 license, the version most people have running on devices is a diminutive version; usually either the RPi version or the Java version.

Retail is still subpar on most non commercial devices. Don’t expect it to run as smooth as your favourite platform.

It has a very big fan and a 4500 milliamp hour battery.

The heat needs to go somewhere, and even with a large HSF, it will be a very warm unit; judging by how my actively cooled rpi4 works. Gauging by my experience with Northbridge sized fans, they’re not exactly the quietest things when they spin up.

The battery size is still going to be relative to the current draw of both the larger/higher res screen and the rpi4’s thirsty requirements. Depending on how active the community is, power management issues could be a problem.

Basically, I’m just saying not to throw in the towel and jump ship just yet. Either way, you’re going to be in for a wait.

I’ve got a white one for sale. We got it in March 2020, but have not used it very much. It is like new (although already built… sorry). I’m in the USA. DM me if you’re interested. 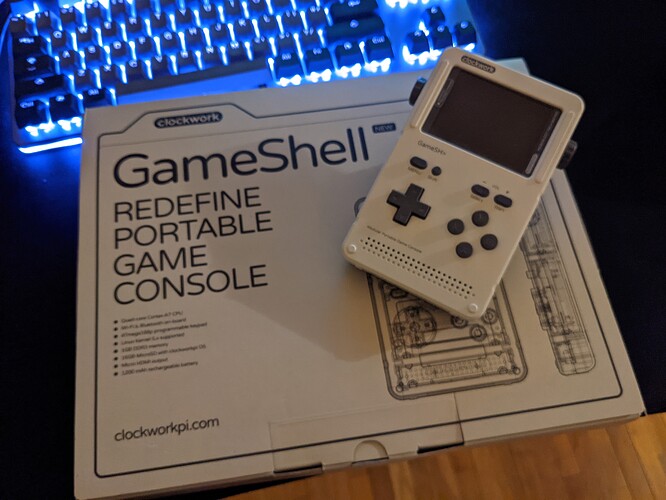 Do we have any restock for this years? I got most part of gameshell except the mainboard. If anyone want to sell a mainboard or gameshell, let me know!

You still have that white gameshell for sale?

Are there plans for any more gameshells? It’s been a while!

official consensus is after the Devterm launch, which is early june as of currently. so not before then. at minimium, i’ll guess at least 3-6 months after that and that is a best case scenario.