Hello, I’m new. I’m familiar enough with Linux to use SSH/WinSCP for things, and I’ve gone through the “GS Guide For New Users” as well.

I wanted to use all the available space on my 16GB SD Card, so I imaged it with the prior firmware, v0.21, using the Etcher app to do so. So far, so good. Boots fine, get the selection menu.

I used the script described in the forums to expand my files system, and to update/install Retroarch.

This one - bash <(curl -s https://raw.githubusercontent.com/hpcodecraft/gameshell-setup/master/run.sh)
Seemed to work fine with no errors.

I copied some ROMs over into the /games/MAME directory, and allowed it to pull down the core using wireless.

Funny thing, I know some of these games work under v0.30, but when I select one it either goes dark on the screen and bounces back to the selection menu, or it dumps into a TTY session asking for the clockworkpi password.

I can’t supply one, because there’s no way to input that using the D-Pad, etc. Even if I could, what is the point, all I have is a console prompt.

Just getting a bit discouraged, because I was running into problems getting MAME ROMs to run that run on other platforms, like the Android MAME emulator.

I bought this for games, all I have is a TTY window, lol.

Should I just ditch v0.21 firmware, or is there a better way to set up MAME? I tried to read the cfg file it creates but it seems like garbage to a ASCII text editor.

Just need some kind of guidance before I just give up entirely.

Do you have a neogeo.zip under ~/games/MAME?

No, I do not. I’m only using a small set of ROMs to test things out.

I’m not sure what is going on here, I don’t think it has to do with the Retroarch upgrade script I ran.

Just bummed I spent all this money and all I have to show for it is a randomly crashing linux system.

I think
you need to re-flash the orig v0.21 or v0.3 firmware ,and do not upgrade the retroarch

if you really want to upgrade retroarch, try a stable release ,not a git version

What kills me is I’m a newbie, using a “guide” that basically screwed everything up. And it is still pinned in the forum! START HERE!!

I’ll try what you suggested. Just a shame that I can’t really recommend this hardware to anyone in its current state.

did you open this issue ?

No I did not. Haven’t had a chance to work with what you suggested. I’ll give it a try this week.

Yeah it was mentioned in several threads here: putting a backed up RA config fixes this issue.

Was it in the tutorial? Because if not, thats just crazy. I’m new, so I thought such a post would have been vetted and updated appropriately.

Chasing forum posts to piece together a viable path for configuring clockworkpi gameshell isn’t what I expected when buying a finished product.

I’m still trying to debug the config that user put up. It looks like his config file is pullig from other repos from what I’ve seen doing a diff against my working backup config. He has since disabled the config file download in the script.

If you don’t have a backup retroarch.cfg let me know, I’ll try and paste mine in a reply here later.

Also, welcome to the world of open source. Nothing is quite a “finished product”, more of an ever evolving tinker project for makers/coders. =) You’ll learn a lot if you’re patient, and have a ton of great people here to help you out!

I don’t mind some legwork, its just frustrating to have something seemingly simple like a Mame install not work properly.

I’ll try to work it out. 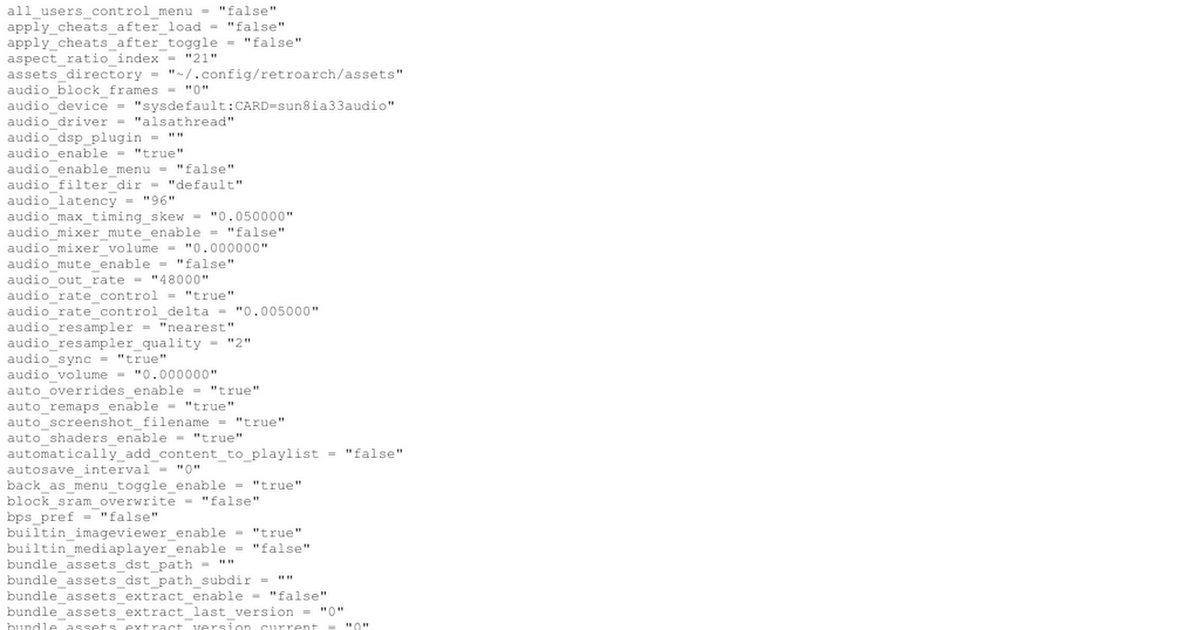 It’s from @biboX from another thread. It’s the backup config I used.

Some frustration seems to be part of the deal here. I sure had my fill, but with some patience it almost always works out.

For what it is worth, I went back to v0.3 firmware.

Mame still seems to only run some games, so I have to figure that out. Gameboy Advance emulator runs pretty much everything I have for that platform, so that’s cool.

Trying to get my head around where everything is stored and how the configs work, but making progress.

Avoid the v0.21 if you went through the tutorial and modified Retroarch, I think that is where I went wrong.