I followed the retroarch mega thread and I can navigate the retroarch menu no problem. But when I try and change controls and it asks me to press the button I want the new bind to be no input registers. I have been kicking myself over and over and can not figure this out. Any help would be greatly appreciated.

Welcome to the forums friend!

I think in the current version of the gameshell OS something is broken with binding keys in retroarch, so to get around this i did the following:

now you can see all the player1 bindings, look for the basics like A, B, X and Y then you can change the keys to be what you like.

once you are done editing press CTRL + X to exit and then yes or no to save.

These are the actual keys that the gameshell emulates with the keypad: 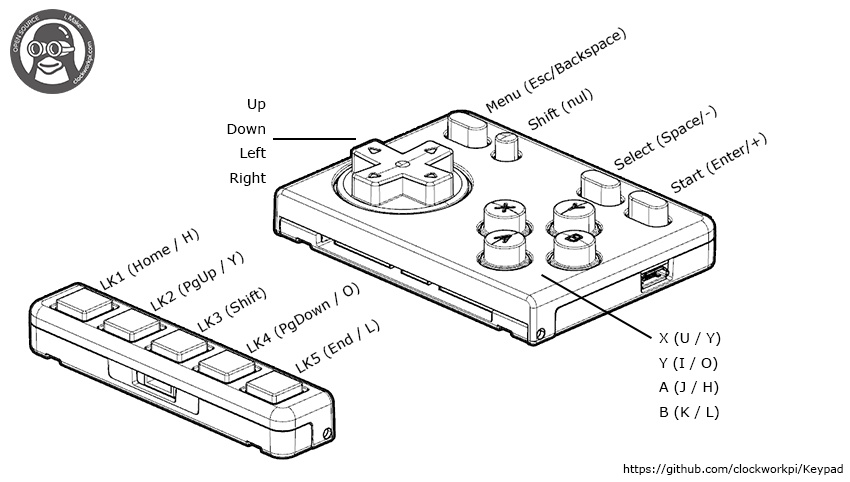 Wow awesome, this has been driving me crazy.

Where do you type all that? In SSH?

Anybody found how this issue can be fixed? I mean to fix editing it within retroarch. I understand that everything can be fixed through ssh but what is the point if you can’t do it on the fly?

As I only configured the bindings once, I didn’t mind doing it via SSH. I guess that’s something that would have to get fixed in RA, wouldn’t it?

If you’re talking about binding keys by selecting them, and trying to push the appropriate key, I think this is something to do with the arduino keyboard not technically being a HID device, but literally a keyboard. What’s strange is that in the menu, it still is referred to as a Retropad.

One “workaround” that I’ve been using is using the quick menu in RetroArch.
Assuming you’ve got a workable setup, and just want to remap keys;

Re: retroarch keybind input problems/timeouts.
I decided to look into it.

Since the Gameshell treats the joystick as a keyboard, it would make sense to use an appropriate driver.

By default, the input driver that is selected is “X”, which I am assuming is X input. This is an appropriate input for a joystick, however given the nature of the arduino keyboard, this is not suitable.

Being the most recent and feature packed driver, featuring keyboard callback, mouse and touchpad compatibility, I decided to try using the udev driver.
The menu can be found here:

To allow Linux to capture keyboard inputs, you will need to add your user to the group “input” with the command:

If it doesn’t work, you’ll need to make a udev rule to make the group “input” available to non root users.

And add the following lines:

Save the file, and then reload your rules, by running:

You should now be able to add and remove inputs completely via the retroarch interface, and not need to edit your retroarch.cfg file manually anywhere near as much.

All of the above and more can be found here:
http://docs.libretro.com/guides/input-joypad-drivers/

@javelinface You are the best!!! This glitch was driving me crazy

No worries! Always happy to help out.
It still won’t work with opening up an onscreen keyboard, and using it for text input. That’s the ultimate goal, and what I was really hoping for. Will look into it ASAP!

Hopefully using udev, it will open possibilities to use the keyboard as a virtual mouse. I’m thinking SNES super scope games, scumm vm and other things requiring a mouse input. Hell. Even MAME, and analogue trackball games.

Theoretically, doing this should omit the need to do steps 7 - 10 of my previous post. I haven’t tested this theory out yet, so if anyone else wants to, that would be helpful to others! Otherwise I’ll probably have a look at it next weekend.

Edit: Had a bit more of a look at the input drivers. Changing to the sdl2 driver for input gives some response (While still allowing key input definition), in the sense that you can at least dismiss the onscreen keyboard. Previously an accidental push of the X button (SNES) would bring up a search dialogue box, and could only be dismissed by holding the power button to reset the device. The dpad however doesn’t move the cursor; instead giving ???’s. Using ABXY types out their respective keyboard designated letter.
All in all, I’d much rather use the more current udev drivers as mentioned above, and completely remove the OSK; onscreen keyboard.
Af the end of the day, the OSK is designed to be used with a joypad, in particular when not in the presence of a keyboard. We are using a keyboard, masquerading as a joypad. I’ll look into it more later.

Edit: update as of September 11 2019
I manually updated to 1.7.8, and a lot of the input timeout problems had been resolved, even being able to use the X-Input drivers. I discovered this, having done a complete overhaul of retroarch, including reconfiguring the configurations.

The existence of this working may or may not be directly tied to 1.7.8, as I have done a plethora of installations of dependencies and personal experimentation and modifications to my Gameshell.

Just putting this here for the sake of prosperity, in case someone tries to apply this in the future, and it’s not longer relevant. (And 1.7.8 has some pretty new new features, such as the AI server; taking a screenshot of your screen, uploading it to a server, having it analyse whatever language the text is in, and re uploading an overlay with your on the fly translation onto you screen! Can’t wait to try that out! Weekend here I come!)

Hi there. Just reading through this thread as I’m struggling to get the player 2 side of my arcade machine working. I’m completely new to this so please bare with me.

I have gone in to the GUI menu whilst playing a rom and tried bind the controls which does not work. Ive noticed that I do get a message saying unable to save autoconfig.

Your guide above sounds brilliant but I don’t know where to start with it. Can somebody please advise?? Do I enter the commands onto my arcade machine using the f4 key or do I use the Winscp program??

Any help would be much appreciated. Thank you so much in advance.

Hullo! Welcome to the forums.
Is this for a gameshell/CPI, or for a raspberry pi or other device. Just saying, with regard to permissions etc potentially being different depending on what system you have. Driver choice also has a HUGE effect on how the input binding works, ie using one graphics driver can break input, unless you change if etc.

The instructions above are for if you were to SSH or winscp into your device. At least for the gameshell, where isn’t an easy way to connect a keyboard and open up a command line. Haha heck, we dont even have an F4 key to push; nor do I know what it would do, since personally I mainly deal with keyboard less devices.

The above instructions are workarounds for a certain build, for a specific device. It sounds like you’re dealing with something else. That said, check out the libretro resources. You may find what you need there: