Thermal Printer does not connect ...?

what is the output of

I dont have a clue right now

I have tried this before, but I will try it again. I am able to print from the terminal, just not from any other applications, so I know that the printer works and is installed correctly. I will have to try to print again in about an hour when I get home as I left the thermal paper at home.

Adding that I am also experiencing the above. Printer worked for a day when I first built machine, stopped working, I have completed all the steps above and printer is printing from echo straight into DEVTERM_PRINTER_IN but not from cups.

I’m using an A06 and have had the same issue since day 1: I can print test commands from the terminal, but no luck via CUPS. Print jobs are held in the job queue. A brief message flashes across the bottom of the printer status window to the effect of Printer 'devterm_printer' may not be connected when I try to release the held job.

This is exactly that I encountered. Even I can print normally after I re-flashed the card, I am still confused about this. What I can confirm is:

Before re-flashing, I have

Then, I’ve tried everything that guu said. And I cannot re-install the printer via terminal, cus I cannot connect GitHub. Therefore, I went to re-flash the card. This time:

So, which makes me wonder, does snapd and flatpak have influences onto the printer?

Several people seem to have reported a problem with the printer after installing snap. I know I’ve seen it mentioned, like on this thread:

I have the same issue with printer from the system/browser GUI, but I can still echo something to /tmp/DEVTERM_PRINTER_IN and it prints correctly. I got frustrated and reimaged, then found out installing snapd can cause this(I don’t know how yet).

For what it’s worth, on my A06 I’ve never installed snap and the printer still works.

I don’t think any official response has come from clockworkpi on this, but it seems like there’s some kind of conflict with snap.

OK this is interesting. Last night I reimaged the card, made sure printer was printing test pages fine, did apt update and dist-upgrade to get everything up to latest, set my wallpaper, set my terminal to transparent, installed snapd and snap core. Powered down.

Powered up the following day and printer no workie.

Edit- just read above post and that follows. The common element here is I installed snap.

Bingo! going through my install notes I used snap to install jami - then I ended up not using jami…

Let’s throw a curve ball into the mix.
I have snapd installed, having used it to install Retroarch.
My printer is fully functional.
Snapd was one of the first things I remember installing.
I’m using an A06 Devterm.
I’ve generally kept my Devterm updated via the OS’s prompts, and apt update/upgrade.

I took your advice and re-installed my OS and didn’t install snapd, printer has been working fine ever since. Thanks for the research!

Looks like the problem may have been solved on this thread. Hopefully clockworkpi will provide an update eventually, but until then it sounds like snapd can be fixed manually. (I have not tested it myself as I haven’t found any reason to install snapd yet.)

for those of us who speak limited linux:
from terminal: (use nano so you can edit the read only file)

As I said in my post, I haven’t actually tried this myself because I didn’t encounter the problem (I never installed snapd).

I would recommend clicking through in the link I provided. Those were not bash commands, and the formatting is not the same as what was shared in the "preview’ that the forum software provides.

The screenshot below of @marrrk 's post has the proper formatting (which you can also get to at the link above). I would recommend asking on that thread for clarification. 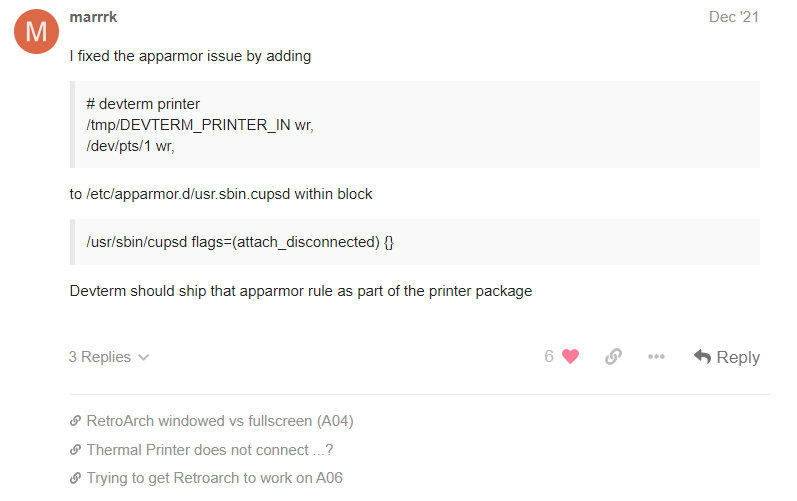 I was kind of hoping this would have been addressed by the ClockworkPi folks, but since I saw this was an issue many were experiencing, I figured sharing the post with a possible solution might help.

I independently came to the same solution, and when going to post it to the forum, I found this post… anyway, I would suggest editing /etc/apparmor.d/local/usr.sbin.cupsd instead and you just need to add the line

there. This way, you keep the original file intact.