Gameshell overheated and now it just boots and crashes

So i was playing castlevania on the nes emulator when my gameshell turned off on me. Felt the back of the case the mainboard is in and it felt very hot to the touch. So i gave it some time to cool off and went to reboot it and it shows the gameshell loading screen twice before shutting off. So far ive disassembled leaving only the mainboard and screen and tried rebooting. Still boots and crashes. I also tried rebooting with the mainboard, screen, and battery and i still get the same boot then crash. From what ive read up on it seems to be pointing to the sd card? (Not 100% sure on that) So my two main questions are 1.) How if possible do i back up my sd card incase this were to happen again cause id real like to not have to jump threw all the hoops of getting doom, hexen, heretic running again. and 2.) is there a possibility it is the main board and if so how to tell? (Sorry I know this is a long post i was trying to give as much detail as possible to hopefully help figure this out lol)

I think its a known issue that it gets hot. ETA Prime made a video on how to mod it to dissipate the heat, but I haven’t felt like I need to do the mod just yet. Are you trying to power it up on battery alone? Have you tried plugging in USB to see if it will boot that way? Perhaps give it a few minutes to charge and try again.

You can back up your image using win32 disk imager. That’s what I used for my retrostone. I haven’t finished tweaking my gameshell to do a back up yet.

Well, you could remove the SD card and mount it in Linux to check for errors. I think most of the overheating stuff is overblown and I’ve never heard of an SD card being damaged by overheating unless it physically melted…
Best way to backup your SD card is to create a 1 to 1 image of it with DD in linux. There’s a lot of info on the forums on that. Also creating a linux liveUSB is very easy as well if you don’t have access to linux.

I just used thin copper heat sinks i got off amazon it gets hot but never overheats on me. Maybe it will help for next time.

Thanks for all the replies guys. I think I’ll definitely be getting some of those small heat sinks. Those look perfect. And backing up my sd card just to be safe lol. A quick update before I have to head back to work, i did get it to boot again without the battery. Then later at work with the battery. But until this morning it would load to a blank screen until i pressed a button. And if i didn’t press anything it would go back to a loading screen and then turn itself off. I’ve noticed that a significant amount of my heat is coming off of the small silver chip labeled AP6212. After some googling i found that its for the bluetooth and wifi. Is there a way to turn those both off when I’m not using them??

Is there a way to turn those both off when I’m not using them??

Yeah, enabling airplane mode at the top of the settings in the launcher should do the trick I would think.

Yea i found it while messing around with it at work, thank you though lol. This completely fixed the problem havent had any overheating so far.

i’ve seen those kits around but they say that the material of the flat heatsink is brass not copper and the adhesive material (tape) is not that great for heat transfer. Have you done any measurements with these on and off? Can you also link the direct amazon item. It might be different from the one I’ve found.

Even if that heatsink was copper and the tape was doing its job I don’t see how this could actually help. The heatsink is totally flat which means that the thermal energy will not dissipate fast enough. On top of that the surface of the heatsink is still covered with plastic from the casing (i am guessing it almost touches it) , leaving zero space for air to do its job. To my understanding this solution will only delay the inevitable for a while longer. Heat will still build up after it spreads to the heatsink and eventually will become equal with the heat produced by chip and rise from there on.

i think that the best solution would be to have a custom build heatsink that drives the heat with a pipe or ribbon-like surface (or two) at the bottom of the Gameshell behind the speaker, not sure how its gonna fit though

Did you add any kapton tape? or did you just stick the copper on?

Add a nice thin layer of silver paste under the heat sink that should help.

We also might be adding to the issue but cramming a bunch of shit in there. Maybe making small air vents in the casing would allow more heat to escape naturally.

I have never had m unit shutdown because of heat, but it does get hot.

sorry late reply been away in the woods I haven’t had any heat issues even without airplane mode and fixed my problem where it would over heat from adding large rom files so seems to be working and my unit never feels hot just slightly warm after long sessions seems to be doing just enough. 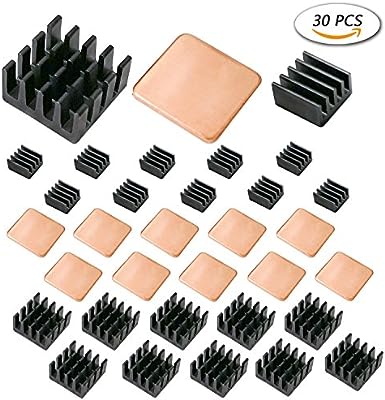