[VIDEO] In-depth DevTerm review after using it for a month. A06 & CM3 comparissons!

I’ve been using the DevTerm daily for over a month. I tested the A0604 module and the CM3+LT. Here is my in-depth review. 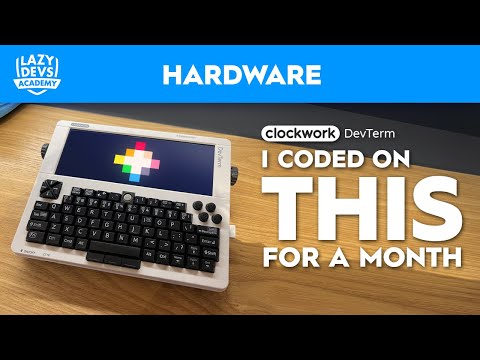 Well! That. Kind of. Took some wind out of my sails. But it’ll be here in 5 days so too late to turn back. For context, a couple years ago I jumped on the “lapdock” fad where I had a raspberry pi zero velcrod to the back of a motorola dock. Similar experiences of everything being slow and extra challenging. I learned a lot! But it was also excruciating to do any serious work with at the coworking space or coffee shop just like you were doing in the video. I know that feeling well. I did it for almost a year until I got a little too DIY one day and killed the power supply. And it has rested in a “some day maybe” pile ever since because i’m not sure even how to open it nor have an interest in learning how power supplies work. DevTerm at minimum will be easy to open. Maybe a little too easy. I worry I swung the pendulum back a little too far but again too late to turn back. I’ll have to just try it for myself.

Well, I can say from all the Linux portables I worked with the DevTerm was the most pleasureable and I think I will continue using it.

Just put the A06 together - no problem installing the Ham radio software I regularly use - now in a much more compact package - I have a Pi 3 in a pi in the box (Harbor Frieght case - 12 volt adapter) but that is a bit to lug around - this will fit in a cushioned pouch. Haven’t tried to program a radio next that is on my agenda. Appreciate the review - my observations - unit is not as flimsy as I had worried it might be - this will keep me from lugging larger things around. I do find myself thumb typing although I have a foldable blue-tooth keyboard then it gets awkward screen is hard to see flat and my eyes aren’t great - screen is large enough to read and I just loaded notepad++ on it…

Glad to hear it works for you. How is your battery flap?

Interesting review! I definitely agree with the design of the gamepad keys and trackball-- don’t see myself using them. Can’t say I have had the same experience with that battery flap though… It stays on fine, even in a bag. Maybe just a flawed part?

You can get the raspberry pi version of Pico8 working on A06 after adding support for armhf in the package manager and installing a couple packages:

I don’t see an RPi build handy but, TIC-80 fortunately doesn’t take much to build from source if you’d like to try dabbling with that too. The instructions for Ubuntu 18.04 should suffice.

Battery flap fits fine - a member of the forum put out a battery advisory and I went with Samsung cells. Must be slightly smaller diameter than others because flap closes. I ran about 3 hours then swapped out cells - charger indicated they were at 75% so battery life is good going to mark cells on the (+) end not immediately obvious afraid I’m going to put them in backwards some day

Pico-8 and TIC-80 are not in the “package manager” of RPi either 32 or 64-bit.
TIC-80 has perfect build instructions, don’t know why you are having problems?

Is this on the A-06? I’ve an A-0604, and I only got three hours and 49 minutes in a video playback test. Were you actively using the device or allowing it to sit idle?

It’s an A06 doing software updates, package installation… not an exact hour count may have been closer to 2 to 2-1/2 but battery life appears to be good. Also what cells did you have? I’ll look at the specs on the ones I used.

RPi 32-bit builds are available for TIC-80 and Pico-8 on their webpages. If you don’t see how that’s more convenient and user-friendly, I don’t know what to tell you.

Yeah I’m starting to think the flap problem is unique to my unit. Puzzling, since optically there seems to be nothing wrong with it.

As mentioned in the review, I already found the workaround. I opened threads for Pico-8 and TIC-80. But I appreciate you sharing it anyway.

I was all set up to build TIC-80 myself but then the CM3 unit arrived and I never got back to it. I should give it a go!

Interesting… if you really want to talk about “user-friendly”, let them (these niche game engines) provide 64-bit binary distribution packages if they really care about the “user-friendly”. No need to question the 64-bit architecture.

Also what cells did you have?

3,400mAh units - although, I admit, I haven’t run them through a full charge-discharge cycle in an external charger to confirm the actual capacity. My figures match others I’ve seen on here, though - you’re the first to suggest anything above the four-hour mark for active use of an A-0604.

If you get a chance, could you try running the device until it powers off - rather than taking the batteries out and confirming their charge status in an external charger - and report back how long it lasted?

Hey buddy. This is some kind misunderstanding There is no need to fight here. I’m just describing the practical realities of using the devices from the perspective of somebody who isn’t experienced with Linux and is considering buying an expensive device like this to use if for their favorite niche software. I’m not questioning any architecture. Obviously, 64bit is where things are heading. The Pico-8 ARM64 build has been already announced. In a year or two things might look different. I’ll be happy to do a follow-up then.

And if you are experienced enough that having to compile from source doesn’t even matter to you then obviously you already know better than me which of the core units is more useful to you. No need to listen to me.

I’m sure they are around 2800 mah ran last night about an hour hard use and drained them down to half. Unit indicated I had about 2 hours left so three hours use may be a realistic number. I’ve got a fresh set in it and will try to run a count of hours - I used the thermal printer too. That uses more power so there is another variable.

Unit indicated I had about 2 hours left

I wouldn’t put too much stock in that: mine reckons it could go for eight hours on a full charge, but if I use PowerTop - sudo apt install powertop - it gives me a much more conservative estimate.

This is some kind misunderstanding. I’m just evaluating the quality of your video.

I think if PICO8 or CPI (or both) paid you to do this video (I mean IF, please don’t misunderstand me) they probably got the wrong person.

Unfortunately in your video it turns into endless juggling, or perhaps you think those are the “humor”, and you just let this little issue stay there

I’m just saying, some people can make videos but that’s not the same as being competent enough to make an “In-deep” review on a product, whether it’s a software or a piece of hardware.

I hope your audiences enjoy your videos … (although you mislead them…)

Don’t worry, they are very smart.

Thanks I’ll investigate … I printed some labels on sticker backed paper - so many benign uses… never thought the printer would be used , but it is handy. I support public events as a ham operator and having a very portable computer and the ability to print could prove useful. Next stop will be some event database tools.